The GPD pocket has a "Goodix Capacitive TouchScreen", which just like the display is rotated by default. The reddit thread suggests to fix this with xinput, which can be made permanent by adding a xorg config file. However this doesn't work if you are using Wayland instead of Xorg.

For me reloading udev rules and triggering udev didn't activate this. But after restarting it did work.
Posted by Daniël van Eeden at 9:36 PM 1 comment:

Bluetooth on the GPD Pocked with Linux

I finally got bluetooth working on my GPD Pocket.

This is with Fedora 26 and the rawhide kernel, but it probably works with many other kernels.

I thought this would need special firmware etc, but that's not the case or the firmware is already available on Fedora.

Follow-up on Fedora 26 on the GPD Pocket

Turns out that there in fact is a bluetooth controller in the GPD pocket as pointed out to me on Facebook. But I didn't get it to work yet. It probably requires a proprietary firmware. The device shows up as Broadcom Corp BCM2045A0 in the output of sudo lspci -v.

I now also got encryption working. The issue was that the grub config had rd.luks.uuid=luks-None. I replaced None by the right UUID (got it from cryptsetup luksUUID /dev/mmcblk0p3). I also did the same in /etc/crypttab. Nonte that after fixing /etc/default/grub and /etc/crypttab you need to regenerate your initrd and grub config.
Posted by Daniël van Eeden at 5:42 PM 1 comment:

First days with Fedora 26 on the GPD Pocket 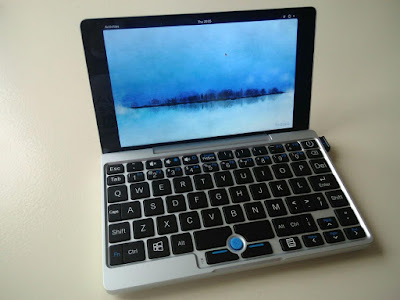 A few days ago I received the 'GPD Pocket' which I ordered from Indiegogo. It was delivered with Windows 10 and the Indiegogo page said that they will create a Ubuntu image for it.

But Ubuntu is not my distro of choice these days. And the Ubuntu image is also not ready yet. So I decided to install Fedora 26 beta on it.

Booting from a USB stick didn't work initially so I bought a micro-HDMI to HDMI converter. This did result in a working combination together with my Dell monitor. However a part of the converter is blocking the USB-C charging port, so you might want to buy a 0.2m converter cable instead so you can still charge your device while the monitor is connected.

I also tried a USB-C hub with a mini-display port connector, but that isn't working yet. This is the "Hyper Drive N21C". Note that you have to put the USB-C power cable in to have it even show up in lsusb.

I disabled "Fastboot" option in the BIOS. Because it is more likely to work without that feature.

To get in the BIOS hit ESC. To select a non-default boot option hit F7.

Installation didn't work the first time. It failed to mount the encrypted partition. So I retried w/o disk encryption. I did wipe the whole disk, I didn't want to dual boot. I'm planning on reinstalling with disk encryption after getting most stuff to work.

To get wifi to work I used a USB wifi dongle with good Linux support.
I also used a powered USB hub to be able to connect enough devices. There is some info online about Linux on the 'GPD Win', which has a similar wifi chip. But putting the txt file in /lib/firmware/brcm didn't work for me. Maybe I did something wrong or the chip is slightly different.

The GPD Pocket doesn't have bluetooth, so you have to use a USB keyboard and mouse if you want an external one. It also doens't have a camera, so you also need a USB webcam if you want to do video conferencing etc.

My GPD Pocket shipped with a US power adapter and a converter which work fine. The battery also seems fine, but there is no battery indicator. I now have to guesstimate the battery time I have left.

If I boot Linux 4.12 (RedHat rawhide) with i915.modeset=0 then the GPD only detects the external display. Without that option it detects both displays (internal and HDMI) but the internal display stays blank, which makes it difficult to login to GNOME as the blank display has the login prompt.

To get the internal screen to work I added video=efifb to the kernel options in  /etc/default/grub and ran
grub2-mkconfig -o /boot/efi/EFI/fedora/grub.cfg

The display stays blank after show boot messages and then switching to GNOME/GDM. But when I press the power button once I then see the familiair login prompt. Screen resolution is great and the touchscreen works.

The speaker(s) and volume keys did work for a bit but then stopped functioning. A cold boot doesn't fix it. The headphone jack also doesn't seem to work.

Brightness keys work, but brightness doesn't change. I only see the setting change.

On my MacBook Pro Retina 13" with Fedora 22 I received notifications about system errors.

This is the error which triggered the alert:

The common advice on the interwebs was to run mcelog, but that didn't show anything.
It turned out that the reason for that is that in Fedora runs it as a daemon and sends the output to syslog.

With journalctl /usr/sbin/mcelog I could see all the errors.

How to fix your locale settings for Mosh

Mosh is a great tool. It does require a UTF-8 environment.

On Debian based systems like Ubuntu the LANG environment variable will be sent in the SSH session. (This is the SendEnv setting in /etc/ssh/ssh_config)

For further troubleshooting:
1. Check your 'local' environment
2. Check if your SSH sends an environment variable
3. Check the contents of /etc/default/locale on the server

Solaris 11 as guest on KVM

To install Solaris 11 as a guest on KVM the following steps are needed.

I will use Ubuntu 12.10 (Quantal) with KVM (qemu-kvm package) and Virtal Machine Manager (virt-manager package). Ubuntu uses a 3.5 Linux kernel.

Create a new VM with:
OS Type: Solaris
Version: OpenSolaris
You will have to click "Show all OS options" before Solaris is available in the list. The list doesn't contain Solaris 11 yet, that's why I chose OpenSolaris.

Now you need to remove the Tablet device which is used to keep the pointer of the host and the guest in sync, otherwise your mouse won't work.

Now you should be able to power-on your machine and use GNOME.

Have fun with SMF, ZFS and all other Solaris features!